Bordeaux, A City On A Mission 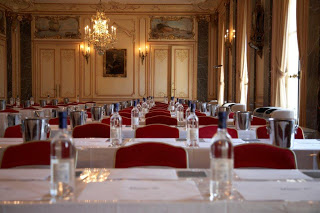 As an English events planner based in Bordeaux I have just started work at one of the most dynamic and forward thinking companies in the region. Groupe Arom are one of the leading events catering groups in SW France and have over 30 years experience delivering first class tailor-made events.

Working with Michelin star chefs and with a state-of-the-art new 1700m² kitchen, office and logistics premises they regularly organise events ranging from intimate luxury cocktail receptions, weddings and business meetings to large scale exhibition/congress spaces and events catering for up to 3000 people.

They have a coverage of the whole of SW France an office in Biarritz and are looking to expand. With that in mind it seems I’m in the right place at the right time.

The future of Bordeaux is looking bright. And I’m not just talking about the new Philippe Stark bike unveiled last week. With the vision and enterprise of Alain Juppé and those in our town hall, the scale and number of future projects for our town is extraordinary. The mairie are talking about Bordeaux becoming the number one city in France for visitors and investment. The new bridge is set to open in a few weeks and we are in a VinExpo year. Bordeaux is set to welcome more overseas visitors in 2013 that at any time in the past.

But the new bridge is just the tip of the claret coloured iceberg. We have the coming rejuvenation of the Bacalan quarter. The Centre du Vin with the expected 425 000 visitors annually will offer a unique world class visitor experience and spectacular views of the Port de la Lune. The redevelopment of the Bassins a Flot and surrounding areas with the new 5 star hotel should bring considerable investment, new industries, housing, bars and restaurants – a lively nightlife spot to rival parts of London or Barcelona. This is turn will bring new life to the restaurants and bars at the far end of the Quais. The new jetty at the Centre du Vin will give tourists direct access to the chateaux by boat and we could even see the arrival of luxury yachts into the Bassins. To add to the mix are similar large scale projects such as the Mama Shelter hotel being built just behind rue St Catherine (also Philippe Starck), the new €40 million art centre, the reboot of the Gare St Jean and 2 hour TGV service from Paris not to mention the new auditorium, Ginko eco-housing district and tram extensions. We will also have a brand new concert venue into which we could finally book the big acts who usually only make their France stopovers in Paris. All of these and more are set to further establish Bordeaux on the international map and bring in the punters.

Bordeaux has come a long way in a short space of time. Long term expats talk of the dark and dreary days of the city before the works started 15 years ago. Stories linger of the deserted port with its fences, warehouses and seedy underworld, the dark faded buildings, pollution and above all the inner city traffic gridlock. But those days are over. During the season, the pedestrian boulevards are bustling and the state of the art trams glide silently past. The international tourist draw cards of the Hotel Regent and Grand Opera have become local landmarks and are complemented by trendy wine shops and Bar à Vins such as the l’Intendant, Max and the CIVB to name a few.

The overwhelming majority of overseas visitors come to Bordeaux for the wine and their first stop is the Place de la Comédie. Invariably the second port of call will be the Tourist office to book a château visit out to St Emilion or the Médoc. Expecting to waltz into the château of their choice, welcomed with open arms by the owners, tourists are often surprised that they need to book far ahead for limited châteaux tours. Some châteaux are indeed completely off limits to visitors claiming they have no need to overtly ‘sell’ their wines or let people in to the exclusive Bordeaux wine world. However a select few seem to be seeing the light.

Bringing visitors in has to be the best way for the large numbers of chateaux to publicise their wines and gain international attention. Already we have the mighty trailblazer of Lynch Bages with their cosy tourist village and the latest addition of the ‘Crushpad’, a visitor experience that allows you to design and create your own wine from scratch. Add to that other famous examples such as the Smith Haut Lafitte with their Sources de Caudalie luxury Spa resort where guests can have skin treatments and spas in used grape residues.

More and more properties are seeing the potential for opening their doors for corporate events,
training courses, seminars and international weddings. Already mentioned are the pioneering Smith Haut Lafitte but there are others such as Château Siaurac, Cos d’Estournil, Le Thil, Mirambeau, Sogeant and Agassac which have large open spaces ideal for summer weddings and corporate teambuilding. Others have already invested in or are in the process of building specific venue spaces which could accommodate seminars, corporate training and other larger indoor events. In the Medoc we have Château Dauzac amongst others. Château Les Carmes Haut-Brion is just behind the Stade Chaban Delmas and are currently working with Starck (again) to overhaul their cellars and create a new visitor center. Another is Château la Dominique near St Emilion with its project for a 250m² tasting room and 450m² panoramic reception terrace and a total redevelopment of their Chais wine production areas. The eyes seem firmly set on the future.

Enter Vinexpo. This biannual fair is one of the main players in the events circuit in France up with the likes of Cannes and Roland Garros. Hundreds of exhibitors with be present from all over the world representing not only the main wine growing areas, but international spirits groups and even governmental tourist boards selling their regions. With all these visitors comes a huge potential for events hospitality during the fair. Fortunately there are also a huge number of options available for anyone wishing to entertain their clients and business partners.

Areas to hold events ranging from corporate seminars to training courses to office parties are growing all the time. The Faïencerie is a unique venue space hidden away at the end of the Quais opposite the Cap Sciences building. Originally a transit hall for passengers on ships heading to the Americas this huge atmospheric building is reminiscent of something in Camden. Equally next to the Base Sous Marine – itself used to host exhibitions and concerts is the Ecole du Cirque, a large circus tent space perfect for an office bash or wedding reception. Nearer the Parc des Expositions is the Carré du Lac, a restaurant owned by Group AROM and with an venue space capable of holding large seminars and a marquee space in the garden. Alongside these are venues both inside the city of Bordeaux and out in the vineyards. Romantic châteaux with their beautifully crafted grounds give companies the perfect opportunity to make an impression on guests. The catering and hostess service for the stands also provided by Group Arom and Lacoste Traiteur is another way to blow away the competition and really stand out at Vinexpo.

The CAPC (contemporary art museum) is celebrating its 40th anniversary next week, a chance to look back at the remarkable evolution of a city once a busy port, then a desterted relic, now firmly back as the world capital of wine, UNESCO tourist gem, European cultural capital and soon to be leader in the world of international events. The phoenix has risen…

Christopher Tighe, 36, originally from London has been happily settled in Bordeaux with his French wife since 2011. With a wealth of experience planning and managing top end events for the McLaren F1 events team he has worked on high profile projects such as the Monaco GP, Nelson Mandela’s 90th and the odd charity gala or two at Buckingham Palace. Brought here by the promise of long summers, surfing the Atlantic waves, skiing the winters and consuming copious amounts of fine food and wine it has been a dream move away from the 70 hour weeks he was accustomed to working events in London. His wife Lisa has recently started a Montessori school in Chartrons by the tram stop Camille Godard called L’Envol des Papillions and they are going from strength to strength. Thrilled to be in Bordeaux at the most exciting time in the history of the city they happily welcome any enquiries about Corporate events, Wedding planning or Montessori schooling. Bring on 2013!!!!!