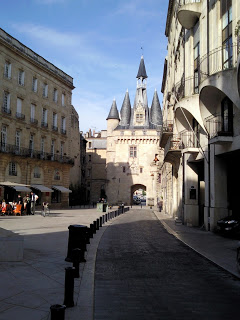 The Place du Palais is suited at the end of Cours Alsace Loraine and is dominated by the ancient Porte Cailhau.

The place was developed in the 10th Century where it was bordered with the Palace de l’Ombrière which was the residence of the dukes of Guyenne. The palace, which was also at the time the Parliament of Bordeaux, was demolished in the 19th century after being destroyed by several fires.

Today, after the redevelopment of the quarter, the place has been converted into being pedestrian friendly bordered by benches and trees. A nice change from the over crowded car park that once filled the centre of the area.

The facelift has also brought new life to the local businesses, allowing them to set up shop directly onto the place itself… offering a great atmosphere for grabbing a bite, knocking back a beer or just enjoying the view.