Jonathan Lewis is a UK expat that has been living in France for over sixteen years. Among other things, he is a ukulele and English teacher and has lived in several different regions in France before settling in Bordeaux.

I was born in Moseley, Birmingham but grew up in Redditch, a town for those who have heard of it is the most boring town in the UK. A calendar of traffic roundabouts is the most notable thing to come out of Redditch recently. 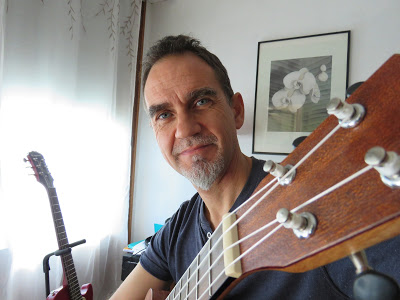 Where have you lived while you have been here?

I’ve been in France for sixteen years and have lived in Marseille, Aix-en-Provence (where my wife is from), Salies de Béarn and now Pessac.

For six years. We left Aix-en-Provence for greener pastures in the south-west and found our Shangri-La in the rolling valleys of the Béarn, between Pau and Bayonne. Unfortunately, we realised after a couple of years that country life wasn’t really for us – both being townies – and the lack of work (farmers don’t need English teachers) made us sell up and move to Bordeaux.

My wife is French but that’s not the main reason we’re here – we were both happy in London. It was more the thought of raising kids in London that made us settle here. Life is just too expensive there, I didn’t want a life of never seeing my kids because I was working all the time to pay for daycare. Also, we left just a couple of months after the events of 9/11 in the US, and having to deal with the stress of stations being evacuated on a regular basis didn’t encourage us to stay. I was a retail manager on Oxford Street, so I was happy to escape the London rat race.

As I said in the last question, we didn’t actually choose Bordeaux, it chose us in the sense that it’s the biggest city in the region and that’s where the most potential for work is. That said, we don’t regret for a second coming here, it’s a great place to live and work.

That the French education system is so sadistic. I don’t remember spending so long in school with so much homework. Are we really less intelligent than the French because of that?  The system here is really designed for a majority to fail, leaving an elite with the right diplomas to succeed.

Like most English-speaking ex-pats, I’ve been teaching English to adults and students. I got my Cambridge CELTA (certificate in English Language Teaching to Adults) before leaving London and have worked for various organisations, including the French Ministry of Education as an examiner for their Diplôme de Compétence en Langues (DCL).

I’m starting a new project right now, and that’s teaching ukulele! I’ve played guitar since I was a teenager and got myself a uke about three years ago. I discovered that you can do much more on a ukulele than just strumming chords and have since created a (moderately) successful YouTube channel with my arrangements of traditional (Celtic and American) tunes, tutorials and a handful of pop songs. So I’m hoping to find a few students that are willing to go a bit further than the average ukulele strummer, and I’m happy to teach in English or French.

There’s always a need for English teachers. It isn’t always easy to get steady work though. A colleague advised me when I first moved here never to put all my eggs in one basket and that’s good advice. It’s always a good idea when teaching to have a few side gigs, private students, Skype lessons etc. just in case your main employer loses a contract and you find yourself with nothing.

I’m an introvert so meeting people has never been easy for me and moving to a foreign country was obviously a big challenge. I guess I’ve done what everyone does – first you get into your partner’s circle of friends and then you make friends with the people you work with or live near. Having kids can help too, as you get involved with school activities or simply meet the parents of your kids’ friends.

Basic schoolboy French, yes. Not enough to make a conversation or deal with French bureaucracy though. My wife spoke good English when we met and it’s kind of hard to switch languages so we still speak English at home which is good for my wife and the children, less so for me.

Bordeaux’s popularity is making it more and more expensive to live so finding accommodation can be tricky for those moving here now. We’ve bought and sold a couple times before coming here so we had a bit of capital to buy – which in our case made buying cheaper than renting. Otherwise everyday living costs are not much more than the other places we’ve lived, so Bordeaux and the region is a pretty good choice.

We go to the beach a lot during the summer. This year, a few public pools in Bordeaux were closed for renovation which meant that our local pool in Pessac was so overcrowded you had to queue an hour to get in, and once in it was so packed you couldn’t enjoy the water. On really hot days we like to go to the coast where it’s always a couple of degrees cooler than the city and stay until late evening, sometimes have a barbecue (not allowed, I know, but just a small disposable one).

Browsing for books in Mollat. It’s a huge bookshop, not as convivial as bookshops in the UK or the US but still a good way to spend an hour or two.

It’s not for nothing that there are so many ex-pats in the region, especially Brits. Aix-en-Provence was wonderful but for me it got too hot and too dry in the summer – the countryside turns brown and yellow. Over here we get a better climate than the UK but still with plenty of rain to keep everything green and I guess that’s the way we like it. We live in Pessac which has lots of green space and plenty of things going on both for the family and culturally so it’s perfect for us, being so close to Bordeaux as well.

I guess for me it’s the traffic. Bordeaux has become a victim of its own success, being such a popular place to live means terrible congestion on the orbital road (rocade) and we virtually never go to coast on the Arcachon side because it can take two hours to get there on a weekend.

Are you involved with any groups / associations / teams, etc?

Not right now. I volunteered to work at the stadium last year during the Euro football tournament, which was interesting – and I’m not even a big football fan. I’d like to get involved with an association or charity and am looking for an opportunity so if anyone has any ideas, get in touch!