THE SINKING OF THE GRANDE AMERICA – IMPACT IN GIRONDE 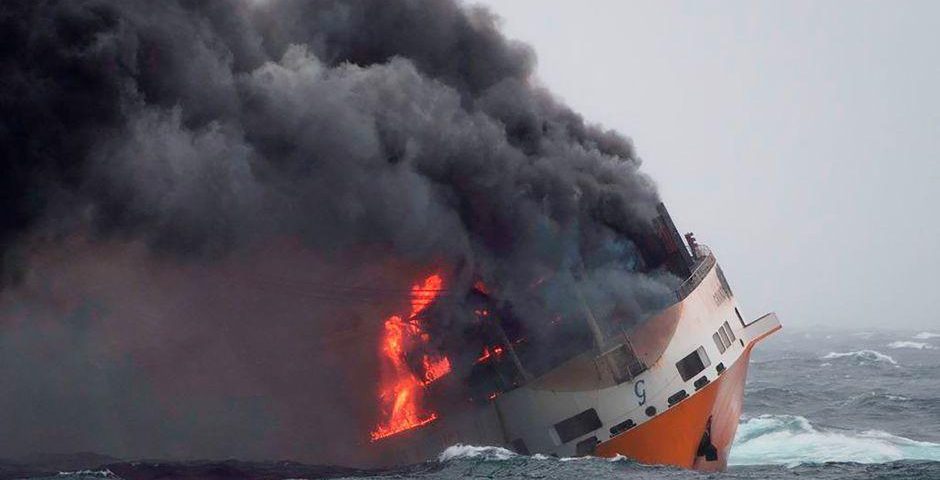 The Italian ship, Grande America, sank Tuesday 12th March after a fire that broke out Sunday. Its crew is safe and sound but the vessel had 2,200 tons of heavy fuel oil in its bunkers.

According to this article on Bordeaux Tendances, on 10 March, around 8 pm, a fire broke out on board the Italian merchant ship Grande America travelling from Hamburg to Casablanca. At that time it was positioned 263 kilometres in the south-west of the Pointe de Penmarc’h in South Finistère. The fire was initially controlled, however resumed shortly before midnight. The vessel has on board containers of which 45 are considered to be hazardous materials, hydrochloric acid and sulfuric acid (of which have been partially destroyed during the fire).

Shortly before 2am, the ship was abandoned by its crew.

The complicated weather conditions then accelerated its sinking. The Grande America sank in the afternoon of Tuesday, March 12, 333 km from the French coast.

Since then, major efforts have been deployed to try to limit the risks of pollution. The maritime prefect said that “at present, the potential risk of pollution is mainly the 2200 tons of heavy fuel oil that are inside the vessel”.  In addition “with westerly winds varying from west-southwest to west-northwest, the impacted area is predicted to be the coastal facade between the Charente-Maritime and Gironde within several days”.

WHAT’S THE PROJECTED IMPACT FOR GIRONDE?

For the time being, no pollution has been detected on the Gironde coasts. However, the maritime and Gironde prefectures are on the alert to mitigate any arrival of oil slick on the Atlantic coast. According to the prefecture of Gironde, “this monitoring is reinforced since the identification by aerial reconnaissance of a layer of hydrocarbons about 10 kilometres long and 1 kilometre wide formed at the height of the wreck of the ship. (…) According to these analyses, the coasts of Charente-Maritime and Gironde could be affected by the arrival of these pollutants within 3 to 4 days”.

It is difficult to know the impact of this situation for the moment, as the weather conditions are unstable at sea. The ocean is currently experiencing heavy seas with strong waves of 4 to 6 meters and a powerful wind of 39 to 49 km / h.  Given the critical situation, the prefecture is currently on pre-alert, and the plan POLMAR (marine pollution plan) could be deployed to act quickly. The Argonaute, a ship specialising in the fight against pollution, arrived on Thursday with experts from the center of practical expertise in pollution control (Ceppol).

If the oil slick continues its progression, it could arrive on the Gironde and Charente coasts by Sunday or Monday. The prefectures are trying to prepare, both at sea and on land, by also organising beach collection kits.