100 Years Past: Traces of the American Landing in Gironde 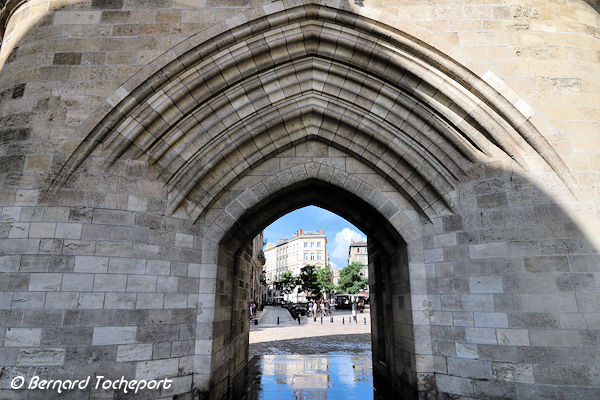 When visitors first arrive in Bordeaux, they are usually blown away by the splendour and majesty of the city’s 18th century architecture, particularly Place de la Bourse. So, did anything actually happen in Bordeaux BEFORE the 1700’s?

Where TF has everything gone?

The majority of physical traces of Bordeaux’s 2000-year-old history across the city have entirely vanished – or more accurately, been demolished for an ‘upgrade’…

Successive waves of building projects over the centuries, notably the transformation of the city under Baron Haussmann and Louis-Urbain Aubert, marquis de Tourny, in the 18th century, have severed almost all links to Bordeaux’s heritage – it’s now largely buried or in the Musée d’Aquitaine!
One of the last major medieval monuments still actually standing in Bordeaux is the glorious Porte Cailhau, just back from Pont Pierre, and hidden away behind the domineering 18th century riverfront arcade.
Former gateway to the medieval city, Porte Cailhau is a rare example of Bordeaux ‘before its 18th century facelift’. Built in front of an older gate on the original Roman rampart, its construction began in 1493 and was completed in 1495. The gate was the main entrance for the medieval ramparts, which surrounded the city.

Located between the mouths of Bordeaux’s two main rivers, the Peugue (underneath Cours d’Alsace et Lorraine) and the Devèze (under rue de la Devise) – at one time navigable to the middle of Bordeaux, it was once the main entrance to the city from the port. It gave direct access to the Palais de l’Ombrière, residence of the Dukes of Guyenne, then seat of the Parliament of Bordeaux from 1462.

Nicknamed the Royal Gate because of its function as a princes’ reception, Porte Cailhau is in the form of a triumphal arch, covered with elegant bell towers and pierced with mullioned windows that reflect the decline of Gothic art and announce the elegance of the new Renaissance style.

A show of strength – shutting down the Bordelais

Porte Cailhau served as both a defensive gate and an arch of victory and dominance – with an imposing statue of the French king presiding over the entrance to Bordeaux. The message was crystal clear – “Bordeaux, you are now under the control of Paris”. 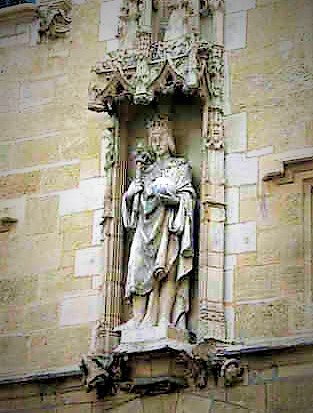 Following the end of the Hundred Years War and English rule of Aquitaine in 1453, France began the process of transforming from a feudal monarchy to a centralised state. As part of this gradual process, it was essential to stamp the power of the King of France, Charles VIII on to the minds of the Anglicised Bordelais. Porte Cailhau was the perfect ideological and physical symbol.
The Porte’s inauguration followed the victory of Charles VIII in at the battle of Fornovo in 1495 – which led to France’s capture of Naples; a battle in which the Archbishop of Bordeaux, the Cardinal of Epinay and part of the Bordeaux nobility also participated.
To celebrate this victory, the jurats (the old name for Bordeaux’s town councilors) placed a white marble statue of King Charles VIII, in the centre above Porte Cailhau’s gate – on his left was the Cardinal of Epinay and, on his right, Saint Jean, patron saint of the Jurad. On the facade, on the city side, are France’s fleur-de-lis coat of arms carried by two angels, the gateway symbolizing the attachment of the heart of the people of Bordeaux to France! These statues were nicked during the Revolution and were replaced with stone copies in 1880.

The defensive and imposing architecture of Porte Cailhau was also designed to deter any attempt at rebellion – the presence of archers’ positions on the city side shows France’s mistrust of Bordeaux. It was a fortress to defend against outsiders as well as those within the city walls!
Bordeaux’s slow integration into the Kingdom of France between the 16th and 18th centuries was a time of severe unrest with a series of violent rebellions and religious wars. The Bordelais lost most of the significant economic and political freedom granted through their privileged relations with England. The region was keen to re-assert its Gascon independence and muscle, not unlike today.

The name Porte Cailhau refers to the local word for ‘pebble’ – ‘calhau’ in Gascon. It was the title given to the ‘daü Caillaü’ wharf located between the Peugue and Devèze rivers – because it was the first to be paved with river stones.
The quay was subsequently called “Quai Bourgeois“, as it was reserved for the landing of wines that the bourgeoisie of Bordeaux had the privilege of bringing into town, without paying any duty.
Long-distance boats brought in shiploads of stones as ballast and left it behind when they set off with the local wine. These tons of stones were used to pave the city and as foundations for its walls…
At the time, vertical docks did not exist. The shoreline sloped gently down towards the river where light rowing boats unloaded the ships anchored in the river.
A glimpse of the ‘lost’ city walls can be seen at 51 – 63 cours Victor Hugo – where remnants of the ramparts are visible through the railings. A large range of mixed stones was used as building blocks for the medieval walls and have their origins in ports all up the Atlantic coast – Brittany, northern Europe and the Baltic. 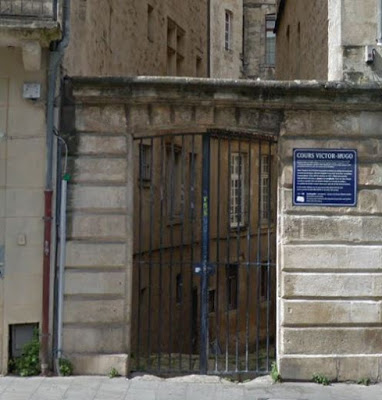 “In 1493 was built the gate of the city of Bordeaux, on the side of the river, which looks out over the palace of the Guyenne and was called the ‘Caillou’ (Pebble), because the ships that came to Bordeaux to collect wines unloaded their ballast there, which was usually pebbles”
The name Cailhou is also shared with the great medieval Bordeaux bourgeois Cailhau family who provided several mayors to the city in the 13th – 14th centuries.

In 1754, when the wharves were being built, Tourny demanded that Porte Cailhau be saved from demolition. He had the access widened by the architect Dardan, and from 1880 to 1890 the architect Charles Durand restored the gate – he declared the following to Bordeaux mayor Adrien Baysselance:
“You know with what satisfaction and contentment the people of Bordeaux have seen a monument they hold dear saved from ruin. In this way, they show you, and you have felt like them, the need for certain expenses, perhaps of no apparent purpose, but which are intended to satisfy the artistic taste, to embellish the city and not to let the memories of a past from which we can no longer detach ourselves except from the country itself”.

The river burst its banks during the ‘flood of the century’ on the 23rd, 24th and 25th June 1875 – the the Garonne rose to 11m40 above normal levels. The flood killed 209 local residents and destroyed 1400 houses – the wharves and Porte Cailhau were all heavily flooded.

On May 28, 1883, Porte Cailhau became a historic monument classified as a French heritage site. In 1907, the Bordeaux Archaeological Society, with the help of the city, created a museum inside the Porte. It included remains of the Gallo-Roman era, maps, seals, letters, travel diaries, pottery, watercolours, earthenware, glassware, portraits of Bordeaux residents such as Léo Drouyn, Rosa Bonheur, as well as a silk dress owned by the famous Madame Tallien – it also housed the Archaeological Society library. 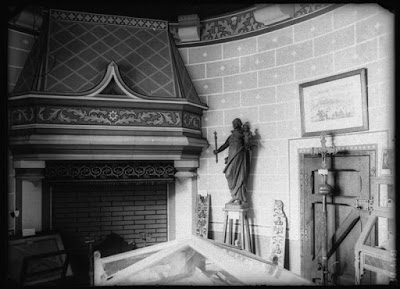 Most of these objects have since been transferred to the Musée d’Aquitaine. 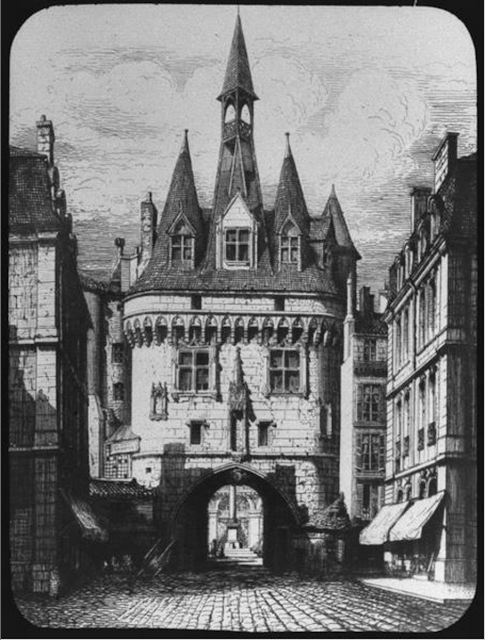 As you approach the gate from the city side, you can see a section of the old rampart (about 2m. thick and 8 to 10m high). 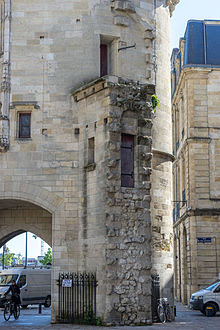 In the passage under the gate, you’ll see the groove in which the portcullis slid and, a little offset towards the river, an opening through which the defenders could drop stones or blunt objects on the attackers’ heads. Fun. 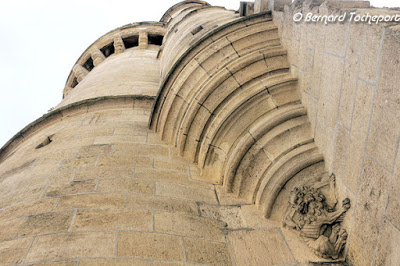 The small opening, about one metre high and now walled in (on the left city side at the bottom of the tower), is the old access door that was too low after the various embankments to build the dock in the 19th century (the ground was raised by about one metre). 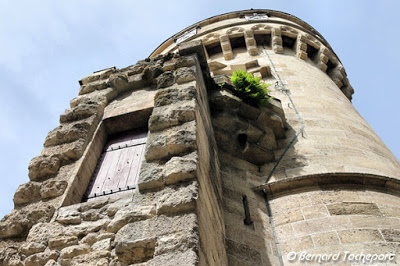 Porte Cailhau is 35m high and has two floors to visit. The first floor is free and contains a small display about the history of the gate. If you pay to go up to the second floor, you’ll be treated to a superb view of the port, Pont Pierre and Bordeaux’s city rooftops. 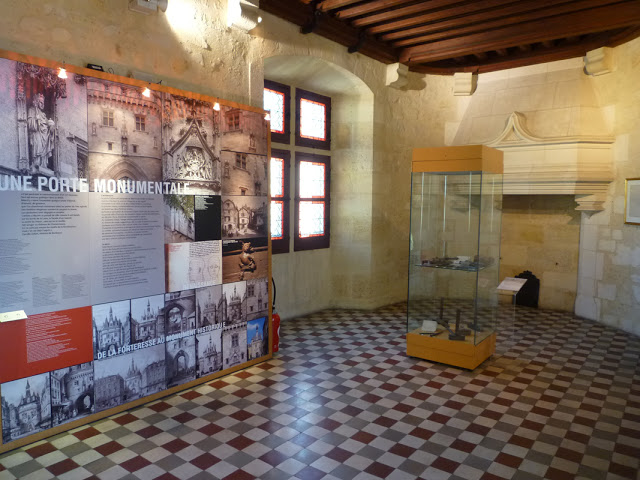 The museum has an audio-visual exhibition on the Jean Missègue collection, a fascinating journey through Bordeaux’s noteworthy stonemasonry trade (if you’re into that sort of stuff).
The gate was part of the Red Ball project in 2010, when artist Kurt Perschke put a giant red ball in the middle – whatever floats your boat mate…

€5 / €3.50 reduced rate / Free with the Bordeaux Métropole City Pass.
Free for children under 12 years old accompanied by an adult

Porte Cailhau through your Smartphone!

Thanks to the AudioTrip application and its geolocation system, you can also visit Porte Cailhau online via your smartphone. You can listen to the commentary and anecdotes on the monument and convert your mobile into a genuine local guide. The Porte is the first monument in Bordeaux to benefit from this new generation guide!
You can download Audiotrip from the Tourist Office applications page.

Here’s a video animation from 2015 taking you inside medieval Porte Cailhau.

And here’s the Tourist Office video